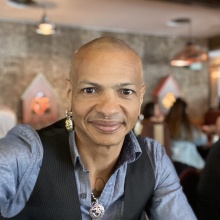 Moriba is a Non-resident Fellow at UNIDIR.  He works on monitoring, quantification, assessment and prediction of space object behaviours in the context of space security, safety, and sustainability. He is a world-recognised subject matter expert in astrodynamics-based Space Domain Awareness sciences and technologies and leads the Space Security and Safety Program at the Robert Strauss Center for International Security and Law at the University of Texas at Austin. He worked for the U.S. Air Force Research Laboratory and NASA’s Jet Propulsion Laboratory where he was a Spacecraft Navigator on a number of Mars missions. He is a fellow of TED, American Institute of Aeronautics and Astronautics, American Astronautical Society, International Association for the Advancement of Space Safety, Royal Astronomical Society and the Air Force Research Laboratory. Moriba has served on the U.S. delegation to the United Nations Committee on Peaceful Uses of Outer Space and he is an elected Academician of the International Academy of Astronautics. He holds a Ph.D. and a master’s degree in Aerospace Engineering Sciences from the University of Colorado Boulder, USA and a B.A. in Aerospace Engineering from Embry-Riddle Aeronautical University, USA.