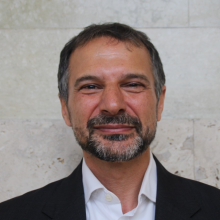 Simon Yazgi is a non-resident fellow in the Conventional Arms Programme at UNIDIR. He has over 20 years of experience in peacemaking and peacekeeping with the United Nations in the field and at headquarters. Alongside his work with UNIDIR, he also servea as Senior Advisor on Security Arrangements in the Department of Political and Peacebuilding Affair’s (DPPA) Standby Team of Senior Mediation Advisors. He has worked globally on peace and security issues, including in the Central African Republic, Colombia, Cote d’Ivoire, Democratic Republic of the Congo, Haiti, Liberia, Myanmar, Papua New Guinea, the Philippines, Somalia, South Sudan, Syria, Ukraine and Yemen. He has a Masters in Development Studies from the University of Hull and a Bachelor of Science in International Business and Modern Languages from Aston University. He speaks English, French and passable Spanish.