Publication
Multilateral Diplomacy and the NPT: An Insider's Account 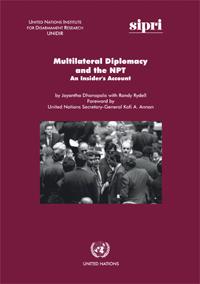 From 17 April-12 May 1995, states parties to the Treaty on the Non-Proliferation of Nuclear Weapons (NPT) gathered in New York to decide on the extension of their treaty. Born of the desire of the international community to prevent the spread of nuclear weapons and achieve a nuclear-weapon-free world, the NPT entered into force on 5 March 1970 for an initial period of 25 years, thereafter to be renewed—indefinitely or for additional period(s)—as determined by a majority of parties at a specially convened conference.

Although intense diplomatic activity leading to the Review and Extension Conference (NPTREC) had seemingly forged consensus amongst a majority of participants in favour of indefinite extension, the permanent extension of the NPT was by no means assured, with strong counter-currents taking shape already from the opening remarks of the Conference. In the event, only enlightened compromise and skilful conference management allowed the treaty to be indefinitely extended without a divisive vote that risked damaging its legitimacy, although, as a reminder of the ongoing challenges facing even a permanently extended NPT, the Conference failed to agree on a Final Declaration.

Authored by Mr Jayantha Dhanapala, President of the 1995 NPT Review and Extension Conference, with Randy Rydell, Multilateral Diplomacy and the NPT: An Insider's Account, is an analytical account of the NPTREC, its preparatory process, and its aftermath. More than a personal memoir, the book focuses attention on the issues and difficulties attending the NPTREC and the discussions, points of view and understandings that made possible the indefinite extension of the treaty without a vote, while placing these squarely within the context of the challenges and opportunities of multilateral diplomacy. The NPT, contends Mr Dhanapala, is a living treaty that has evolved in response to the challenges of history and will continue to do so in the future—though whose permanent extension must never be taken for granted nor put to the test.