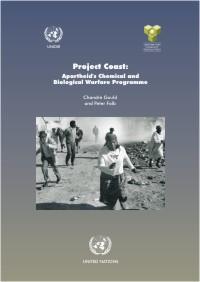 In the early 1990s, acknowledging publicly and dismantling its nuclear weapons programme gave South Africa a moral lead in the prevention of nuclear weapons proliferation and in pursuit of global nuclear disarmament. Perhaps in much the same way, the revelations over its covert chemical and biological weapons (CBW) programme and the transparency with which the government has dealt with them, have enabled South Africa to take a lead role in the negotiations for strengthening the 1972 Biological and Toxin Weapons Convention. Openness concerning its experience during the apartheid years lends real credibility to South Africa's ethical and practical stance on international disarmament.

South Africa's covert CBW programme, code-named Project Coast, began in 1981 and formally ended in 1995. Ostensibly motivated by the need to develop better crowd control agents and defensive CBW gear, in practice the programme focussed on the production of poisons intended for the assassination of state enemies within and outside the country and of unsuitable chemical substances. Conceived and operated beyond ordinary political, military and financial controls, Project Coast functioned on the basis of a myriad of front companies, illicit transactions, personal relationships and invisible power structures.

Drawing on the evidence presented at the criminal trial of Dr. Wouter Basson, managing officer of Project Coast, numerous interviews and other relevant documentation, Project Coast: Apartheid's Chemical and Biological Warfare Programme by Chandré Gould and Peter Folb offers a meticulous account of South Africa's clandestine CBW programme under apartheid. The book, which contains a preface by Archbishop Desmond Tutu, makes a major contribution to our knowledge of the South African apartheid CBW programme and serves as a warning of the grave dangers posed by CBW in the absence of adequate supervision.