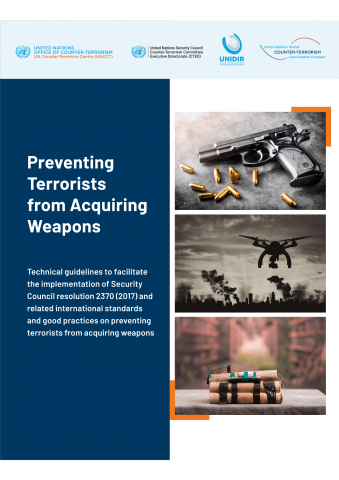 Terrorist acquisition of different types of weapons, including Small Arms and Light Weapons (SALW), their corresponding ammunition, improvised explosive device (IED) components, and uncrewed aerial systems (UAS) and components, poses a global threat to international peace and security. Preventing such acquisitions by terrorists presents States and the international community as well as communities of practitioners with a set of complex and multifaceted challenges.

With the adoption by the Security Council of its resolution 2370 (2017), the Council reaffirmed its previous decision in resolution 1373 (2001) that all States should refrain from providing any form of support to those involved in terrorist acts, including by eliminating the supply of weapons – including SALW, military equipment, UAS and their components, and IED components – to those involved in terrorist acts. The Security Council urged Member States to act cooperatively to prevent terrorists from acquiring weapons and called upon them to become party to related international and regional instruments. Resolution 2370 is the first Security Council resolution specifically dedicated to preventing terrorists from acquiring weapons.

The technical guidelines have been developed as part of a broader project that seeks to facilitate and support the implementation of resolution 2370 (2017), relevant subsequent resolutions, good practices, and international standards. The technical guidelines aim at contributing to the enhancement of Member States’ legislative, strategic, and operational capacities to prevent, detect and counter the acquisition, illicit trafficking and use of different weapons, systems, and components.

These technical guidelines are non-binding and should be considered living working reference document. They are also expected to form a basis for dialogue at different levels, including among regional and national stakeholders in their efforts to assess, develop, review, and refine regional and national measures to prevent terrorist acquisition of weapons. Following roll-out, application and use, the document will be subject to modifications, revisions, and updates, based on feedback received from States and the technical communities of practice.

Support from UNIDIR’s core funders provides the foundation for all of the Institute’s activities. UNIDIR’s work in this area has been supported by the Government of Germany.

Technical Guidelines to facilitate the implementation of Security Council resolution 2370 (2017) and related international standards and good practices on preventing terrorists from acquiring weapons. Compiled by CTED, UNOCT and UNIDIR, 2022.

Government of Germany, CTED and UNOCT.