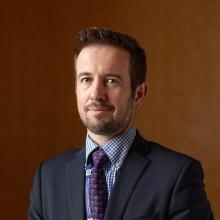 Head of Programme, Weapons of Mass Destruction and Other Strategic Weapons +41 (0)22 917 2847 james.revill@un.org   JamesRevill

James Revill is the Head of the WMD Programme at UNIDIR. His research interests focus on the evolution of the chemical and biological weapons and he has published widely in these areas. He was previously a Research Fellow with the Harvard Sussex Programme at SPRU, University of Sussex and completed research fellowships with the Landau Network Volta Centre in Italy and the Bradford Disarmament Research Centre in the UK. He holds a PhD focused on the evolution of the Biological Weapons Convention from the University of Bradford, UK.